There are few things as intoxicating and satisfying as meeting someone who lives a fully coherent life where “all outward things are images of inward life,” as Yeats, the poet of eternal opposites, longed for.

We met recently to discuss the donor-advised fund she and her husband Tom established at TMF. They have used the fund to benefit causes they care deeply about, such as First UMC Austin, Austin Achieve Public Schools, Avance, Boys and Girls Club, GENAustin, iACT (Interfaith Action of Central Texas), LifeWorks, People’s Community Clinic, Planned Parenthood, Reconciling Ministries Network and Texas Tribune. They have also made a gift to TMF’s Gil Rendle Learning and Leadership Endowment. 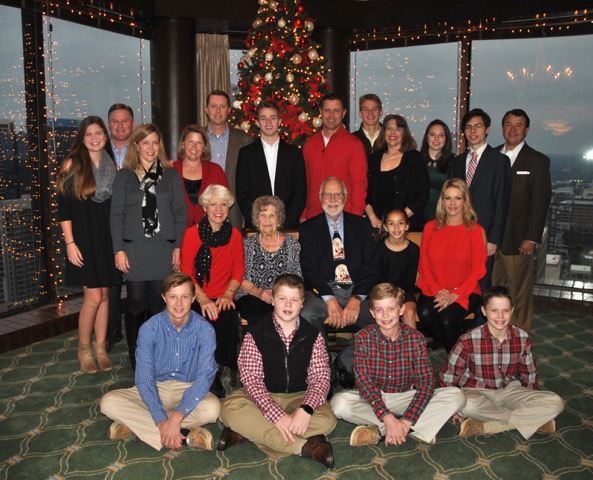 I asked how she and Tom developed their giving over the course of their marriage. How has it changed? Who and what influenced their growth?

Though there is something simultaneously astonishing and inevitable about the Ausley’s journey, she describes it as one with many twists and turns, obstacles, discoveries, and defining moments, but with a trajectory toward faithfully sharing God’s abundance.

One profound shift occurred when they heard a sermon entitled “Anchoring Your Faith Through Giving.” The message was one, not of guilt for having material possessions, but of responsibility as stewards of God’s gifts. Though not a new message, both Robbie and Tom took it to heart. “We realized in order to dethrone money and anchor our faith, we must be more intentional about our giving.”

In the famous Wesleyan triad conversion, their hearts and minds were aligned with their faith, but they realized they needed to work on converting their pocketbooks. “We began our journey toward tithing that year, increasing our pledge each year.” In addition to deepening their faith, they experienced another benefit from their deliberate approach to giving – it intensified their engagement on every level.

“We weren’t living in a spiritual vacuum, by any means. We were active in our church and other organizations and gave what we thought was a significant amount, but that sermon prompted us to take an honest, reflective look at our lives,” Robbie observed. They discovered they were operating out of an assumption of scarcity, out of insufficiency, focused on acquiring the next possession – a new car, the next house, a fancy boat. “Understanding that God provides abundantly and relies on us to distribute those gifts was a moment of clarity and call that freed us from that treadmill of want. What we need to do God’s work in the world is here. How we use our material wealth is, above all, a witness to our faith and trust in God.”

Robbie was born and raised in Lubbock, Texas. She and Tom met when they were 15 at MYF at Asbury UMC.  She grew up in a household defined by religious and political commitments. Like her mother’s ardent belief in the social gospel, Robbie’s political activism has been decisively shaped by her faith. You will see her shock of white hair lighting up the steps and chambers of the capital as frequently as the pews of First UMC.

“I believe that my religious faith, carefully understood, should inform my politics,” Robbie remarked. But far from turning her faith into a blunt political weapon, she, instead, turns to what she sees as truly fundamental biblical imperatives – caring for the poor and most vulnerable among us, women’s rights, quality education for children, access to healthcare. And her efforts are focused not merely on treating symptoms, but rather on eradicating the causes of suffering and inequality. Robbie and Tom support organizations that help, especially marginalized, people achieve their entire well-being—mental, emotional, and spiritual needs, as well as physical.

Two lessons from her mother reinforced the view that a faith-informed conscience could advance the cause of justice and compassion. “She always told me to ‘lead with your heart,’ and that ‘you can never understand someone unless you walk in their shoes,’” Robbie explained.

“Shortly before she died, my 84-year-old mother expressed her profound disappointment in the UMC’s exclusion of the gay community from full participation in the life of the church. After her death, I ‘led with my heart’ and made a concerted effort to talk to every United Methodist clergyperson in Austin and the surrounding area who would meet with me, including the Rio Texas Conference bishop. They represented a range of views on this issue – and no small number of intractable opinions – but, to a person, they listened, were respectful and took me seriously, as I did them. I think they knew that far from trying to divide the church, I was encouraging the church to fully live up to the Gospel message of love, mercy, grace, hope and justice that our world desperately needs.”

Living the counter cultural imperatives of the Gospel requires constant vigilance. “It’s so easy for the ‘more is better’ norms of our consumer society to creep into our lives,” Robbie cautions. “Richard Foster’s description of money as crabgrass is instructive: ‘Money, like crabgrass, has a way of re-rooting itself in our hearts. We think we have dethroned it and made is an obedient servant, and then all of a sudden it subversively attempts a coup.’”

Robbie describes another revelatory event in their journey when “the power of money re-rooted itself, and we became gripped with fear and anxiety that led to a lack of faith and generosity. It was Sunday morning, January 1, 1988. Tom asked me to drive to church, so he could read the newspaper. I didn’t know it at the time, but he was worried about some real estate investments we had made to provide for the college educations of our four teen-aged children. I was driving down Enfield Road and suddenly Tom asked me to turn around and go home. While reading the business section of the American Statesman, he discovered the real estate partnership had declared bankruptcy. He knew our line of credit at the bank would immediately be called, a sum we had no way of paying which could ultimately lead us to bankruptcy. I’m not sure in that moment I fully comprehended the financial impact of this news, but I still felt that worshipping with our church community was a better alternative than returning home.”

Though she can’t say worship that day was a healing experience, as she watched her husband wracked with worry and guilt, Robbie and Tom both learned the healing power of community during that dark time. As expected, the bank called the note, the Ausleys experienced financial difficulties, and they had to decrease their pledge but “the church never decreased its pledge to us. Instead, the community at First UMC was our life source during those difficult times, a source of compassion and community that sustained us and continues to be an anchor in our faith journey.”

This experience unmasked the lie of self-sufficiency that is central to an attitude of scarcity. “We relied on the grace of God and on others, especially during this stressful time. Eventually we were able to increase our pledge and give to the church as a grateful response to what we have been given:  a community of support and faith that upholds us with prayer and concern and an opportunity to worship God and to serve the world.” This sense of interconnectedness reinforced their commitment to an integrated life of giving – works as well as money. As followers of Jesus, they knew as long as there are hurting people and injustice and brokenness in the world, they are expected to be involved in works of healing and reconciliation alongside other people. For Robbie and Tom, that is indispensable to an experience of abundant life.

One of the ways Robbie keeps our individualistic economy and “crabgrass” in check is by making a habit of assessing how her spending reflects her values. “I keep meticulous records about our spending and review those expenditures regularly and make adjustments if they don’t align with our values.”

Naturally, she and Tom wanted to cultivate similar habits in their children and wanted them to experience the tremendous stimulant to faith that their giving had become for them. “In my typical ‘full speed ahead’ approach to parenting, I encouraged (they would say mandated, and strictly enforced) them to give 10% of their allowance to the church.” Though she realized after a year that this heavy-handed approach was not inspiring the spirit and grace of giving she intended, it did plant a seed. When a flashy sports car passed them one morning on the way to church, their 15-year-old son blurted out, "I'm going to buy me a red sports car some day." Then he stopped in mid-thought and quickly added, "but, Mom, I promise to tithe first."

As with all values, the most powerful lessons in generosity come from modeling it. “Every Christmas I fill 20 Christmas stockings for my four children, their spouses, my 10 grandchildren, my mother-in-law, and Tom. One of the gifts is a $100 donation to a charity in their name that I carefully choose each year for that individual, based on their interests and involvement with different organizations and causes. There’s a bit of suspense each year around what charity I selected for them.”

Robbie and Tom now talk candidly and often about faith and money with their grown children. The Ausleys’ donor-advised fund includes provisions for their children to inherit the fund and collectively make decisions on distributions to beneficiaries. “We trust them to continue the spirit of our priorities – human rights, compassion, justice, access to quality healthcare and education. They will choose organizations that speak to them and are making a meaningful, positive impact, as we have, but I know their decisions will be animated by their faith, as well.”

“We are grateful that TMF will be there for our children as they make these decisions, as you have for me and Tom. We have been extremely pleased with the exceptional service at TMF. We believe in TMF’s purpose and have a high level of trust and confidence in the management and staff, so it was a win-win decision to establish our fund there. And we have been pleased with the prompt service and easy process for distributing funds to beneficiaries.”

How will you use the abundance that God has entrusted to you? At the end of the day, perhaps that is how we know we have an abundant life – when we understand, as the lives of Robbie and Tom Ausley demonstrate – that what we have been given is precious and how we choose to use it is the best expression of our faith; when we share our lives – our hearts, minds, and purses – with others; when we “lead with our hearts,” and recognize that what we have is always enough to be used by God.